skip to main | skip to sidebar

Found more stash, need to lie down for a while.
Posted by Catknit at 6:46 pm 3 comments:

Its been a very wierd but educational day today, my yarn buying habit must have been really out of control for the stash to get to the size it is. I used to be a one thing at a time kind of knitter but since discovering internet yarn stores and knitting forums, that all went out the window.

I have been a good girl lately and the lack of funds kind of yarn dieting has worked wonders, I haven't bought any yarn since March this year but the stash still overfloweth!

I spent today taking piccies of my stash to put on Ravelry and mucking about trying to put it back into the hiding places so it looked less-needless to say failed on the hiding front and found more than I thought I had. 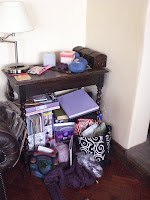 Now to upload all the stash piccies onto Blogger would probably take until Sunday night but just to shame me into tidying it, this is a pic of my knitting corner.

It started off as a nice old table with a lamp on top and a knitting bag (note the singular) with 1 project in it.

Then some books and magazines started appearing (mainly cos the lights in the hallway where the bookcases are didn't work for a while and I had to use a torch after dark to look for a particular pattern).

The project bags started to breed at an alarming rate leaving trails of little UFO's behind them and gave enough shelter for the smaller gadgets (needles, row counters, stitch markers etc etc etc. ) to hide in and avoid being found when needed and forcing me to buy more which then hid amongst the UFO's and started breeding themselves.

It all started to go really downhill after the beads arrived, they started off all innocent looking to be added into the odd shawl or border but then they called in a load of craft wire reinforcements followed by a box of pliers and findings for the wire jewellry.

I will tidy it sometime soon but always get distracted by a pattern or a magazine or something shiny......those beads have a very naughty glint in their eyes.....

Of course if you want to look at the stash, it should be viewable on my Flickr account but its still uploading so will increase as the evening goes on.

Has she gone a bit nuts or just avoiding work again?
yup, its the avoiding work thing.
2 posts in a week-unheard of.
Anyway, I've quite got into this knittted jewellery thing so finished another couple of necklaces and even made a pair of matching earrings for one of them.

The one on the left is gold coloured wire with lilac/purple beads and sits quite low on the neck.
The right hand side is a choker made from silver wire with some Swarovski crystals left over from something else. The beads are mostly clear and pink so instead of putting on a clasp, I crocheted thin ribbon for the cast off and left long ends to tie it at the back.
These aren't for me tho, a friend of a friend has a sister who owns a crafty shop place and is interested in selling them for me *shock*.....could this be a less boring way to make a living than book-keeping? It doesn't take much........

And just to give myself a break from stringing beads for a while, I started a sock last night which is on a KAL on the crafty threads forum. The patttern is designed by Probablyjane and really good to do, looks like 2 colours worked at the same time but nu-uh,
its all done with slipped sts. We likey.
Posted by Catknit at 4:16 pm 7 comments:

and I'm a bit disappointed, not because of how it turned out-I absolutely love it, but because it was such fun knitting it I'm sad to finish.

Which at a guess would mean I need to make another......

This one was knitted in Habu Textiles pure bamboo laceweight bought at Ally Pally two and a half years ago but sat waiting for the right project to come along and it was worth the wait. I have enough left to make another the same but might try dying it another colour or use it for another lacy project.

The yarn is smooth, silky and soooo soft, an absolute dream to knit, I used good old Brittany Birch needles and some beads which were lying around from something else (and they must have been around for quite a while because I can't for the life of me remember what the something else was!

If the weather improves tomorrow, I'll post some pics of other recently finished FO's but its raining again and the light is really bad, my photography is bad enough without trying to do piccies in dull light. ( finished 2 cardi's, Lotus Blossom Tank and some more jewellry so it might be a bit picture heavy).

Good grief, you forget to blog for a few weeks then go to leave a comment on someone elses blog and realise that you can't go on because your email address had to be changed and you can't remember the new password 24 hrs later.-well you might not, but I do, well in fact I did and only just managed to get back on here after 3 days of trying.
So I thinks whilst I'm here, I might as well bung a bit of knitting on, so rather than trying to do a catch up of the not so recent projects, I present to you the Jewellry bits I've been messing with.

This piccie is knitted gold wire with lilac and purple glass beads. Just needs a clasp of some sort now and probably a pair of earrings to match. It took about an hour to knit plus some extra time for stringing beads.

This second one (modelled by DD1) is a choker made from purple craft wire with black beads and a satin ribbon to tie it at the back. Its now dissappeared along with dd1 into the dark hole she refers to as her room, I call it a pit.

You know when you put off doing something for ages and then just never quite get back to it?

Well ain't that just the way with blogging, I've had a horribly stressful couple of months, details of which I won't go into here because this is supposed to be fun.

So the blog has been neglected yet again and when I come back to it, I can't think what to put first! Should I start with the oldest F.O's or the most recent and work back?

Summer Secret Santa exchange from the Crafty Threads'N'Yarns forum was a real treat, 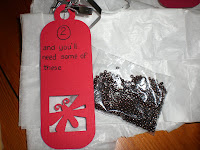 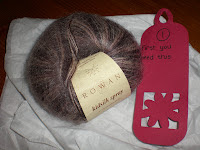 The lovely Slowasasnail sent me some Kid Silk Spray and beads to go with and a pattern for a scarf using said yarn and beads and some choccy for me and a giant Bonio to keep Foster quiet whilst I knit (it lasted long enough for me to take the ball band off anyway!) 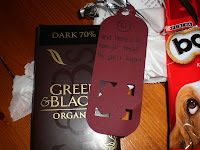 The scarf is now finished and packed away as a Christmas present for someone so I've started getting some of that out of the way too.
So, close up............................ and the whole thing. The pattern is a kind of feather an d fan with
3 rows of beads lengthways every 4 rows-nice to knit and lovely effects from the yarn. 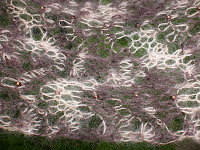 Currently working on a secret project for a friend in some rather scrummy laceweight, finished and sewn up a jacket in Cotton Glace but need buttons, and a disaster with a cardi from yarn which has been in the stash for a long time, I'm 6 metres short and no way of buying anymore so I will have to take some from the cuffs and re-do the bottoms of the sleeves-fortunately it's a top down pattern-it's in the naughty corner for now but will re-appear soon I hope, when my stress levels go down a bit.
Posted by Catknit at 9:18 am 3 comments:

yup its working again, haven't been able to blog for a while because I forgot and then when I tried to earlier, it wouldn't work......right then, off to sort out some knitting photos and do a proper post!
Posted by Catknit at 2:05 pm 5 comments:

Testing, Testing one two one two
Posted by Catknit at 2:05 pm No comments: